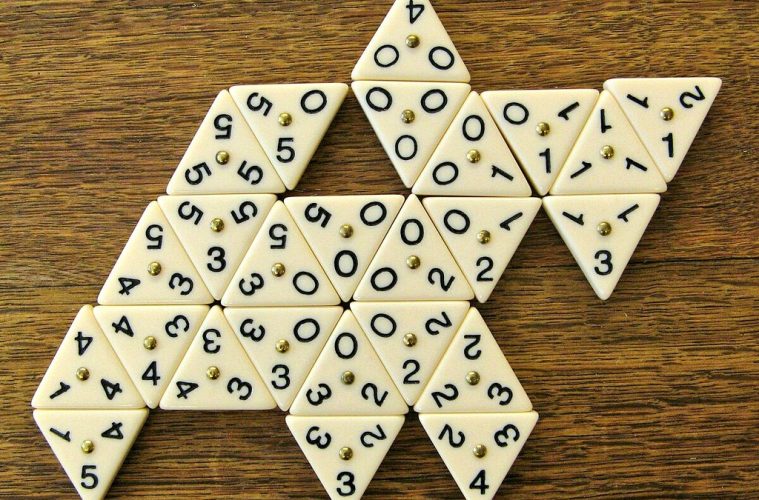 How to Play Tri-Ominos Game – Rules and Instructions 2023

Triominos is a cousin of the famous dominoes game. It is played using triangular tiles.

The most famous commercial model of Triominos was made public by Pressman Toy Corp. in 1965.

In contrast to dominos, Triominos utilizes triangular tiles and has a distinctive playing style. Here’s how to play Triominos.

Triominos is tailored for 2-4 players. the requirement to play this game is a series of Triominos.

Triomino tiles have the shape of an equilateral triangle. These tiles have at each corner a number between 0-5 and have the same rules as dominoes, in which the three numbers mustn’t decrease in a clockwise direction.

You may find sets with the numbers 0–6. Instead, they’ll have 8 tiles.

In this article, our attention will be focused on sets of 0–5 for two players.

The game makes use of a set of 56-triangular tiles, with numbers from zero to five at every corner.

The shuffling is similar to ordinary dominoes: Turn them over facing down and jumble them up with your hands.

Depending on how many are playing the games, the players take out their tiles:

The rest of the tiles form the “well” where they are kept in a reserve that can be utilized necessary.

Write down the name of every participant on a piece of paper. For each game, the scorekeeper adds or subtracts the points in the corresponding column.

There isn’t an exact set of rules, but most players will decide to begin the game with 10 tiles each.

The tiles are selected randomly from the well. The game begins as soon as all the players have 10 tiles.

The player who has three of a kind starts the game by playing the token. If the two players have a triple, the person with the highest 3’s goes first.

If none of the players has a triple, then each player calls out the highest tile they have.

The player that has the bigger tile plays out that tile and starts the game.

The aim in the Triominos is to be the first player to hit 400 score points by playing all the tiles in your hand.

The tiles must match the tiles already on the board to achieve this. The rules are close to those of dominos, with some additional complex elements due to the triangular tiles.

How the Game Is being Played

Once the first player has started the game with his highest tile or triple, playing of the game starts from the first tile.

Since each tile contains 3 numbers, the main rule is that every match must have at least 2 matching numbers.

For example, assuming the first tile is a triple 4-4-4, then make a match with one side of the tile.

Each side correlates with two corner numbers, and therefore every match must have 2 corresponding numbers.

To continue with this example: To match a 4-4-4, you need a tile that has not less than two 4s, like 2-4-4. Matching is achieved by putting the tiles on their respective sides.

The first player gets the sum of the 3 numbers on the Tri-Omino with the addition of a 10-point bonus.

If three Ominos begin the game, there’s a 30-point bonus, along with the standard 10-point bonus.

The player, who has the beginning Tri-Omino and the three Os, can play one of them.

If that player decides to start the game with the three 0s to get the bonus points, he‘s to show the other players the Tri-Omino carrying the same highest number on it.

If none of the players has a Tri-Omino with three matching numbers on it, the participant with the one total highest Tri-Omino starts the game.

The combined numbers on that Tri-Omino are added to the player’s scores but do not score any bonus points.

If a player wasn’t able to make a match, he must remove tiles from the stock.

The player keeps taking until he can make a match. Remember that for every draw from the stock results in a point penalty.

Determine who the scorekeeper will be and have them write down the name of each player on a piece of paper with enough space to add and subtract points during the game rounds.

How to Win a Round in Triominos

The 1st player to match all of his tiles and achieve 400 points is the winner of the round.

He also gets a bonus of 25 points plus the total of all triples still in the hands of the other players.

These points are not deducted from the other player’s score.

When all players have folded, it blocks the game, and the player that has the lowest number of Tri-Ominos wins the round.

All points from the remaining players’ hands are credited to that player, but no bonus points are given.

The player also has to subtract the total of points remaining in his hand from his score.

To start a new round, set all the tiles to face down, and shuffle them so each player can select new ones.

Each round is played similarly as the first, starting with the player that has the Tripple number Tri-Omino.

As with dominoes, there are rules to improve the game experience.

The inconsistency to the rule of matching 2 numbers occurs when you’ve to complete a shape.

This 6th tile must, however, match 3 numbers, unlike the usual 2. This is because 2 sides match simultaneously.

Scoring is a key aspect to pay attention when learning how to play Tri-ominos.

Record the tile value for every tile played on a score sheet.

Other steps that have an impact on the score are listed below:

For forming a bridge, you earn 40 points with the addition of the three numbers from the Tri-Omino used are added together.

If after a bridge has been formed, a player can match two sides of a Tri-Omino and add them to the bridge, he gets the sum of the three numbers on the Tri-Omino and 40 points.

Note: These bonuses pile up with the tile values for the tile played.

Blocking of a hexagon is a common strategy in Triominos because by completing a hexagon, you receive the highest number of points.

For example, an ongoing hexagon contains 4 tiles. If you carefully choose the 5th tile, you can block the hexagon.

To block hexagons, you must pay attention to the tiles being played on the board.

Since the last tile required to complete a hexagon must have 3 specific numbers, you can force a block by making the last tile to be a tile played earlier on.

The strategy for Triominoes is to anticipate, as there’s a penalization for drawing tiles.

One tip is to set up future matches. If you’ve got a tile that matches another tile in your hand, play it.

Block shapes and future hexagons, except you are capable of completing the hexagon.

Don’t be scared to draw. The penalty is unimportant if you achieve a match.

Are there variations in the game?

Yes. There are variations with tiles from 0-6, although the typical variant of Triominoes Deluxe makes use of tiles with the numbers 0-5.

Can Triominos be played online?

Yes. You can play the game online via apps for Android phones.

How many pieces are there in Triominos?

A Triomino set with 0-5 tiles consists of 56 pieces in total.

How many pieces do you draw?

At the beginning of the game, every player is allowed to draw 10 tiles.

We do hope this guide has helped you master how to play Tri-Ominoes.