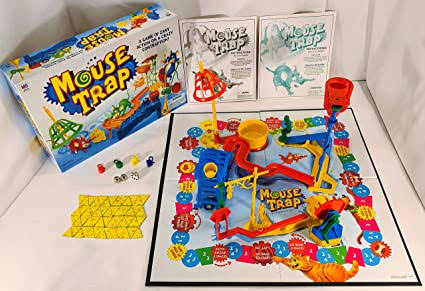 How to Play Mouse Trap Board Game

Mouse Trap (formerly titled Mouse Trap Game) was published for the first time by Ideal in 1963; here’s a comprehensive guide on how to play Mouse Trap board game.

The title is a two-to-four-player game and was one of the earliest commercially available three-dimensional board games.

To win the game, participants must first collaborate to construct a functional mousetrap.

Then, players attempt to catch mice as the game progresses; read on to learn more about playing Mouse Trap.

Mouse Trap is a game where players create a series of traps to capture the mouse as it moves around the board stealing cheese from other players.

The Mouse Trap game can help children develop a variety of critical abilities, including construction, cause and effect, and decision making.

Mouse Trap is not simply a children’s game; it’s enjoyable for all ages!

As you walk around the gameboard, take turns creating the Mouse Trap.

Then, using the Mouse Trap, attempt to capture your adversary’s mice.

Win by being the last uncaptured mouse on the gameboard.

To begin, detach the cheese wedges from the cardboard sheet the first time you play.

After removing the wedges, dispose of any remaining cardboard.

Whenever you play the game:

The Mouse Trap game rules are incredibly easy to follow:

Decide who will go first. It’s left to right from here.

When it’s your turn to move the mouse, roll the die and go the number of spaces on the gameboard depicted.

Once you’ve landed, follow the directions posted on the area you’re in.

More than one mouse can occupy the same area at the same time.

As you move your mouse about the game board, you will be able to gather Cheese pieces from the Cheese pile and from your opponents.

To catch your opponents’ mice, you can employ Cheese pieces later on in the game.

Thus, it is possible to build one section of the Mouse Trap and take one cheese from the Cheese pile when you land on the Build space, and there are at least that many players present.

Go Back & Move Ahead Spaces

Supposing you land on one of these spaces, you must proceed to the indicated place, but disregard any instructions printed on that area and avoid collecting any Cheese pieces!

Your turn is now complete.

These spots are marked with the number of Cheese pieces you should take from the pile when you fall on them.

Cheese pieces can be taken from the opponent with the most in the Cheese pile if depleted.

A tie for the most cheese pieces means that you can either take all of one opponent’s cheese or share it evenly between them.

It doesn’t matter if there are any cheese pieces in the pile if you land on the area labeled “Take Three Pieces of Cheese From Rival With Most.”

A tie for the most cheese pieces means that you can either take all of one opponent’s cheese or share it evenly between them.

Return the appropriate number of Cheese pieces to the Cheese pile if you land on one of these spots.

There is no need to return Cheese pieces over your current stock.

When you land at this location, do no action. Your turn has concluded.

These are the six spaces at the path’s conclusion, starting with the Safe area and concluding with the Cheese Wheel space.

Finally, the Loop is a portion of the walkway where mice are captured.

Once at The Loop, you and your opponents will take turns circling it indefinitely until the Mouse Trap is fully constructed and only one mouse remains uncaptured on the gameboard.

Two pieces of cheese are automatically taken from the Cheese pile if you land on the Cheese Wheel.

If the Cheese pile is empty, you can take any pieces you are entitled to from the opponent with the most Cheese pieces.

It’s up to you whether or not you take all of an opponent’s Cheese pieces if there are two or more opponents tied for most of that type.

When you land on a Build area, as previously mentioned, you may construct one component of the Mouse Trap.

Assemble the Mouse Trap by arranging each numbered component according to the Building Plan.

If you are the first player to land on a Build space, you will immediately place part #1 (Base A) on the game board.

The following player who lands on a Build spot will place part #2 (Gear Support) and so on until the Mouse Trap is complete.

Take one Cheese piece from the pile immediately after placing a piece of the Mouse Trap on the gameboard. Your turn is now complete.

When you arrive on a Build spot on the Loop segment of the game path, you add two parts to the Mouse Trap and remove two Cheese pieces from the Cheese pile.

Your turn is now complete. After completing the Mouse Trap, you do nothing when you arrive on a Build spot.

Once completed, use the Mouse Trap to attempt to capture your opponents’ mice.

This is how to do so:

When you reach the Turn Crank space (in The Loop) when an opposing mouse is on the Cheese Wheel area, steadily turn the crank in a clockwise direction.

This initiates the trap. If the trap is set properly, the opposing mouse will be caught and eliminated from the game.

Any Cheese pieces in the seized player’s possession must be surrendered to you.

If the trap does not capture the mouse, the other player instantly moves the mouse to the Safe spot.

If multiple mice occupy the Cheese Wheel slot, they may all be taken (or missed) simultaneously.

If no opposing mouse (or mice) occupy the Cheese Wheel location, attempt to reposition one or more mice there.

Moving the mice of your opponents

You can try to trap an opponent’s mouse if you land on the Turn Crank and there is no op-posing mouse on the Cheese Wheel space at the end of your turn.

The number of times and opponents you can deal this damage with depends solely on the number of Cheese pieces you have to return to the pile.

Turn the crank as instructed above if you are able to get a mouse (or mice) on the Cheese wheel.

Cheese chunks can only be used in the Turn Crank area.

Before setting the Mouse Trap in motion, you can try to move another opponent’s mouse onto your turn crank if yours is already on the cheese wheel when you arrive there.

You can’t try to move an opponent’s mouse to the Cheese Wheel area if their mouse is on the Safe space (placed on The Loop).

You win if your mouse is the final one remaining uncaptured on the gameboard!

The first player to complete a full circuit of the board earns the two bonus cheese wedges placed on Start at the beginning.

Supposing you land on the blue launch-the-trap slot with an existing pawn, you can still place ANOTHER pawn in the cheesy danger zone.

Thus, you may grab a cheese wedge from ANY captured mouse!

You are still in the game if you get caught by the mouse trap.

On your next turn, you simply begin at the Cheesy Danger Zone.

If you share a spot with another player, advance to the next available slot.

If a trap is launched during your turn, it must always be reset

Continue around the board until someone collects six-cheese wedges.

In the event that a player does not have any cheese, they can be sent to the trap instead

What is the basis for the Mouse Trap game?

The Mouse Trap game was inspired by Rube Goldberg’s intricate designs. Rube Goldberg was a cartoonist, sculptor, author, engineer, and inventor known for his outlandish inventions.

How many parts does a Mouse Trap contain?

Mouse Trap is comprised of 24 components.

What is an illustration of Mouse Trap?

A Rube Goldberg mechanism is exemplified by the Mouse Trap.

Mouse trap board game is a fun pastime for everyone. It’s a cool option among the best board games for 6 players.

The rules are easy to learn, and before you know it, you’ll be busy winning.

Chutes and Ladders: Rules and Guide