How to Play Chinese Dominoes Rules

Chinese Dominoes feature in many tile-based games, such as pai gow, tien gow, and the like. They’re known as gwat pai in Cantonese that literally means “bone tiles”.

Also, it shares the same name with a northern Chinese game but has starkly different rules from Tien Gow, its the southern Chinese version.

Historically, the first references to dominoes in China were in 1120 AD. However, during the Renaissance, there were reports of encounters with Chinese dominoes by Western visitors to the Far-East.

Till now, they’re still prevalent in several countries in Asia. Chinese dominoes are played quite differently than the Western version.

In a set, we’ve 32 individual tiles, with each tile appearing longer or narrower compared with Western double-square domino tiles.

This is because they’re designed in a different height or width proportion so that they can be held easily in a player’s hands, just like a hand of playing cards.

In this post, we’ll hold you by the hand and show you how to play Chinese Dominoes.

How to Play Chinese Domines – Rules and Walkthrough

The Tiles of the Game

In Chinese Dominoes, the pip patterns are based on two Chinese 6-sided dice, with each likely outcome of a toss represented on a tile.

21 combinations are possible, and 11 of them are repeated. So, in this game, a set has 32 tiles in total.

Apart from that, the pips’ color pattern is also based on Chinese 6-sided dice.

Each single pip & group of 4 pips has color red. For instance, the 4-5 tile contains 4 red pips as well as 5 white pips.

The only exception here is the 3-3 tile, with 3 of its pips being red — a feature that makes it look distinct as the highest-ranking tile.

Additionally, the tiles are divided into 2 “suits”. These are a Civilian and a Military suit.

You need to memorize all these as no shortcut is given to determine which tile belongs to which suit.

Name and Ranking of a Civilian Suit? 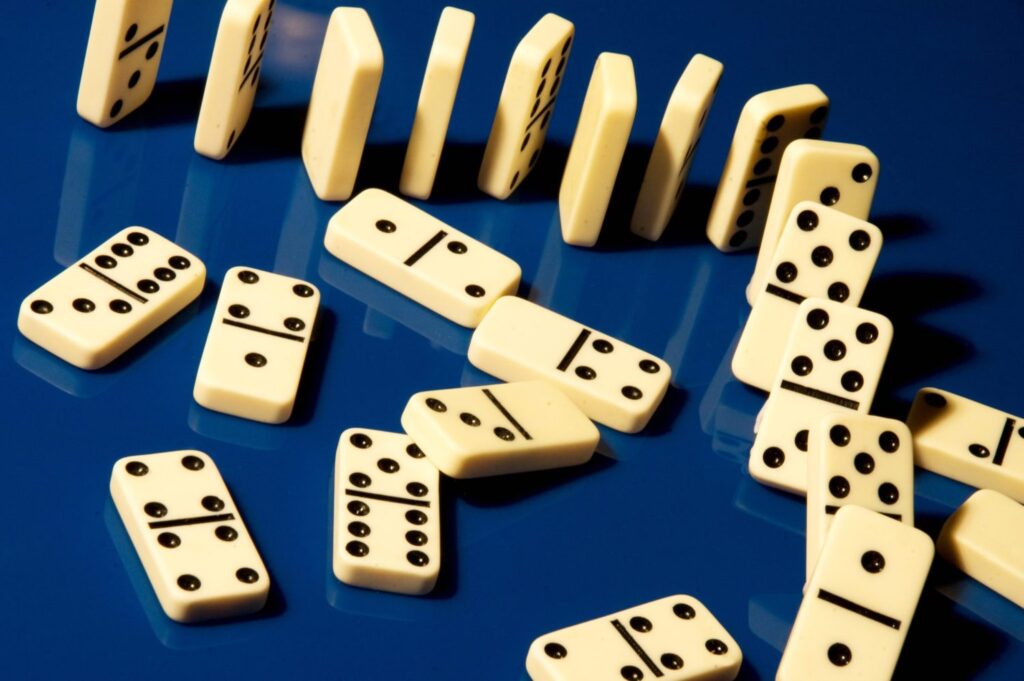 Also, each of the 22 tiles carries a name that matches a particular Chinese philosophical or cultural symbol.

The ranking of these dice is done according to these names, and not based on the number they carry.

As earlier stated, no specific formula is used for remembering the name and rank of each tile. But you’ll find some helpful visual cues below.

The ranking of the names is done in the following manner:

The tip for this is to note that heaven is the highest realm. So, it’s the highest ranking tile, and expectedly, it carries the greatest number of pips as well.

Earth lies below heaven, so its rank is the 2nd highest tile. Since earth is a planet, the 2 opposite pips have the appearance of orbiting planets.

The tip for this is that man lives on earth. For this reason, so he comes below earth in the ranking. Also, as man is flesh and blood, the tile contains all-red pips.

Since animals are of a lower status than men, they’re ranked below man. You can consider the red pip as a head on the end of a long and white neck.

In the ranking, plants come below animals, and you can take each set of 5 pips as 4 petals enclosing a white center.

Don’t mistake this for “Tree” because it contains fewer pips compared with the Plum Flower. In the tile, you’ll find 2 lines of 3 pips that are competing for space on it.

The tip for this is that furniture is manufactured using plants. If it’s a bench tile, the 2 sets of pips you’ll see on either end work as screws for the legs.

You’ll find the axe under the bench, and the set of 5 works as a handle, while the set of 6 represents a hatchet head.

The hint to use in this case is that the total pip value is 7, and the red pip gives a head. As for the white pips, these are a pair of legs.

6 is the total pip value, and the set of 5 stands for the arms, legs, and torso. The head is represented by the red pip.

Name and Ranking of a Military Suit

In Chinese Dominoes, the military suit comprises the 10 tiles left in the set. These are ranked and named based on the summed up number of pips on either end of the tile.

Also, these tiles are divided into pairs according to this number. For instance, both the 4-5 tile and the 3-6 tile are referred to as “9s” and taken to be a pair.

But there are some exceptions: the 3 and the 6. These are counted individually.

In some variations of this game, they could be paired together to give a 3rd suit. This is called the “supreme” suit, outranking all the other pairs.

In all Chinese domino games, dealing is done from a “woodpile”, a row of stacked dominoes.

And the woodpile’s height changes from one game version to the other.

To choose the dealer, roll 1 or more dice.

It’s the specific game that will tell you the number of dice rolled, and the order of play will go counter-clockwise from the dealer.

As with all other games, you need to practice to learn how to play Chinese Dominoes well.

How to Play Sequence for Kids

How to Play Tri-Ominos with friends