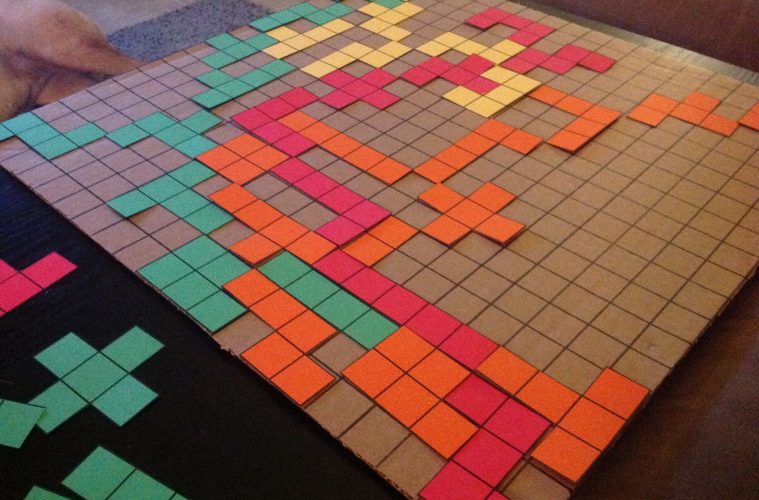 How to Play Blokus – Rules & Instructions

Do you think all the games you’ve tried during your game night are too simple that the adults couldn’t enjoy themselves or too complicated for the kids to keep up?

If so, you’re not alone.

If you require a board game with sufficient strategic complexity for continuous replay but is also simple for a child to learn, then Blokus is for you.

It’s a tactic game for 2–4 players in which you attempt to place many of your pieces on the board as possible.

After you lay a tile, you must place it so that it touches a corner on any one of your other pieces.

Once you’ve played as many tiles as possible, count the tiles that you were unable to put down to determine who the winner is. Let’s walk you through how to play Blokus.

The Blokus board is a framework of 400 squares of the same size in 20 rows and 20 columns.

There are 84 pieces comprising four different colors (21 tiles per color); the 21 pieces for one color are of various shapes.

In Blokus, there are 5 different types of polyomino, each with one to five individual squares.

The Goal of the Game

Every player must place as many of their 21 pieces as possible on the board.

How to Play the Game of Blokus

The player each selects a color and places them in front of his/her side of the board. Blue, yellow, red, green is the order of play.

The first piece each person plays must be placed in their corner of the board.

Pieces can only be placed where they touch the corner with another piece of the same color.

Please note, however, that only the corners may touch each other. Edge-to-edge contact between two pieces of the corresponding color is not allowed.

When it’s time for you to play, place one of your pieces somewhere on the board where no other piece is.

The game goes on clockwise, with the players alternately placing one-piece or passing the turn.

It comes to an end once all the players are hindered from placing any more pieces, including any players that might have positioned their whole pieces on the board.

After that, the scores are summed up, and the player having the highest point wins the game.

If all their pieces have already been placed on the board, a player receives +15 points and an extra 5 points if the smallest piece set on the board was the final piece (one square).

Although Blokus is intended for four players, there are also variants for 2/3 player games.

Each player receives two colors and will have to play both colors.

To get extra points, going out with any color, as usual, earns you bonuses, but the game continues till nobody can place any more pieces, or until one player has played all his pieces for the two colors.

According to the two-player rules, the game comes to an end when any of the two colors goes out totally. The two players add up their points, with 1 sum for the colors.

This variant can lead to surprising results if the player, even though he is not the one to place the last piece, win with higher total scores.

That is, in this variant, the addition of the sums of points for the colors of second and third places can sometimes exceed those of the first and fourth places.

For a three-player game, chose a neutral color. Before the regular game starts, the neutral color is placed alternately and randomly on the board.

The neutral pieces are set as an obstacle for all players. They must not be placed in a way that gives another player edge over the other two players in terms of free spaces in their corner of the board.

Other Variants of Blokus

Blokus Duo, also known as Travel Blokus, is a two-player variant of Blokus, which makes use of just two colors and a smaller board.

The starting pieces are placed in the middle of the board and not at the corners since it involves only two players.

Combined together, these 2 factors imply players run into each other’s pieces a lot earlier in the game.

This forces both players to adopt more offensive strategies and provides a quicker and more competitive experience than standard Blokus.

Blokus Trigon: This style is comparable to the primary Blokus regarding strategy and rule-set, but has triangular pieces and a 6×6 grid game board instead of the square grid and tiles of the original game.

Blokus Giant: This version is exactly what it sounds like.

Rules and colors are similar to the typical game, so is the playing grid, but both are bigger.

Blokus Junior: This is a kid’s version with two players, like Blokus Duo. The rules are similar to regular Blokus for this version.

The only disparity is the diversity of game pieces.

To help little kids grasp the rules and get involved in the game’s strategy, a smaller, more accessible type of polyominoes is used to represent each color.

Ever since it was made public, Blokus has been very popular with teachers and daycare workers as it can be used for educational purposes.

It’s a game in which you must plan, imagine, strategize, and try to get the better of your opponents, and it’s this depth that has made Blokus a sensation.

If you’re a parent considering an exciting way to get your child’s brains to work hard or just want to add a fun, spirited and strategic game to your game collection, Blokus might be just what you’re looking for!

Best Board Games for 6 Players