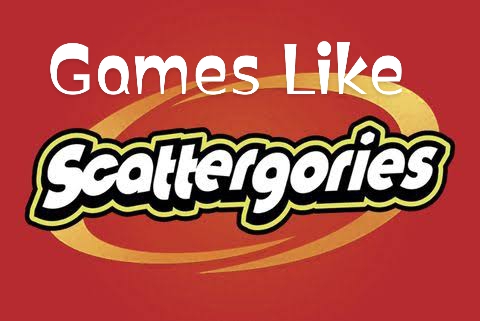 If you’re an ardent fan of word games and are seeking games like Scattergories, then you’re on the right page.

Scattergories is a board, puzzle, and multi-player video game originally created and published in 1988 by Parkers Brothers.

When Parker Brothers was acquired by Hasbro some years later, the latter published the title internationally under the Milton Bradley brand.

In the category-based party game, the emphasis is on creative thinking.

Hence, this feature is also required in games like Scattergories.

Here are 7 alternatives to Scattergories to try out with your buddies and catch some fun.

The Game of Things

Also called Things, this title is a party game that’s perfect for a family game night.

It’s a compact card game suitable for adults and kids.

In this title, everyone will write a response to a specific prompt and then, the players will attempt to guess the player that wrote the response.

In The Game of Things, there are more than 300 topic cards for players to draw from.

To start the game, a reader is picked, who will read aloud a Topic card.

Then, all players will write a response, fold up their paper slip, and submit it to the reader.

The reader will now read the responses aloud once and then a second time.

The player by the left of the reader must guess the person that wrote a specific response offhand without being allowed to take notes or read the responses again.

If the player guesses correctly, they’ll continue guessing until they give an incorrect answer.

When that occurs, the player by the left of the guesser will try to guess.

Players with responses incorrectly identified will be eliminated and disallowed from making guesses.

The round comes to an end when a player hasn’t been matched to a response.

All in all, The Game of Things promises you exciting, hilarious moments and is a great alternative to Scattergories.

Published by Parkers Brothers and later by Hasbro just like Scattergories, Taboo is one of the best party games out there.

It’s a word-guessing game where a player aims to get their teammates to guess the word on the player’s card without making using of the word itself or five other words listed on the card.

The title incorporates a timer and forbidden words with similarities to Catch Phrase where a player attempts to have their partners guess words with verbal clues.

In Taboo, players will be split into teams.

During each turn, a player will draw a card containing a word printed on it which they’ve to describe so that their partner can guess what the word is.

There are specific taboo words listed on the card as well which the player isn’t allowed to use when describing the word, and all this has to be done in a limited duration of time.

Taboo is a fun, enthralling, and fast-paced game suitable for kids and adults.

Thus, it’s ideal for the whole family and is one of the most interesting games like Scattergories.

If you’re fed up with Scattergories and want to try your hands on a similar game to the title, you can never go wrong with Pictionary.

The skills required to play Pictionary include vocabulary, wordplay, drawing, and image recognition.

It’s a fun and entertaining charades-inspired word-guessing game that was invented in 1981 by Robert Angel and his friends.

When it was first published by Angel Games in 1985, the graphic design was done by Gary Everton.

The gameplay starts on with players splitting into two teams.

Then, during each turn, a player from each team draws one card and must put in the form of drawing any item on the card within a limited time duration.

The drawing is done on an easel.

They’re not allowed to say anything, and their partners have to guess the item drawn before the other team does.

The first player who lands and guesses correctly when the game ends wins.

Pictionary’s license was acquired by Hasbro in 1994 and later in 2001 by Mattel.

It’s also a creative addition to your family game night.

As far as any list of word games is concerned, Scrabble is a staple.

In this crossword game, two – four players earn points by placing tiles with each bearing a single letter onto a board.

This game board is split into a 15×15 grid of squares.

The tiles have to form words read left to right in crossword fashion in rows or downward columns.

And these words must be in a standard dictionary.

In Scrabble, the object is for a player to build words from their tiles and build on the words already laid out on the game board.

To win a Scrabble game consistently, you need to be strategic and also have a broad vocabulary.

Experts in the game strategically place their tiles to make sure they can maximize their point value.

The player that earns the highest points at the end of the game wins.

In all parts of the world except the US and Canada, Scrabble is a trademark of Mattel Games.

But in North America, it’s a trademark of Hasbro.

Bananagrams is yet another fascinating word game like Scattergories.

Bananagrams shares lots of similarities with Scrabble as both are crossword games using letter-tiles to build words upon each other.

However, in the former, there’s no board, and it’s impossible to get a triple word score also.

Gameplay has to do with a player arranging their tiles into a grid of connected words faster than their opponents.

The objective of Bananagrams is to be the first player to complete a word grid after exhausting the pool of tiles.

There’s an online version of the game designed by Large Animal Games in collaboration with Majesco Entertainment.

In the online version, the same protocol was used as the tabletop edition.

However, some adjustments to the gameplay and social media features were also provided for players.

Players were allowed to play live Bananagrams games or send challenges to their buddies, and share completed games with others.

Like Taboo, Just One is a guessing game but with key differences.

Just One is a cooperative party game developed by Ludovic Roudy and Bruno Sutter.

A game for three – seven players, it was published in 2018 by Repos Production.

The object of Just One is to earn a score as close as possible to 13.

Before they do the guessing, the card containing the word is shown to the remaining players, and they’re to pen down a clue that’ll help them there.

This clue can be anything, but bear in mind that duplicate clues are removed before they’re seen by the guesser.

This means it can backfire when you give clues that are too obvious. For three – seven players, Just One games can last around 20 minutes each.

It’s played over 13 rounds, and a correct guess earns a point while a wrong one loses a point.

Over the game’s rounds, players strive to score as high as possible.

Just One board game is also a cool option to add to your collection of alternatives to Scattergories.

Boggle is both a board and word game invented by Allan Turoff.

The title, which was originally distributed by Parker Brothers, is played with a plastic grid of lettered dice where players find words in sequences of adjacent letters.

In this game, your limitations come in the form of the letters that fall and the position they fall on.

Boggle presents a level of challenge akin to that of Scrabble.

Gameplay starts by shaking a covered tray containing 16 dice with the shape of a cube and with each having a different letter printed on each of its sides.

The dice will fall into a 4×4 tray so that only the top letter of each cube can be seen.

After falling into the grid, a three-minute sand timer is started, and all of the players in the game start the primary phase of play at the same time.

The players must find as many connected words as possible within three minutes from the face-up letters settled in the grid.

While seeking fun and entertaining games like Scattergories to play with family and friends, you can get the ideal title above.

Scattergories is a board, puzzle, and multi-player video game which was originally created and published in 1988 by Parkers Brothers.