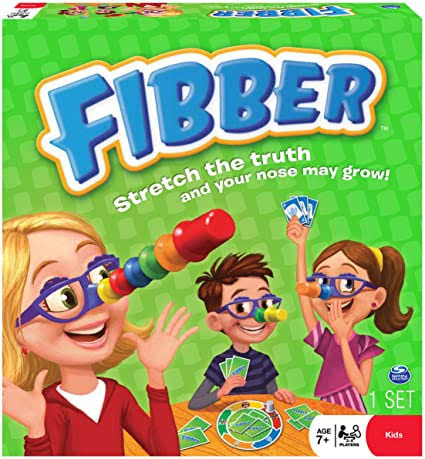 A family pastime that makes lying fun, Fibber is an exciting match that defies your usual experience playing board and card games. Instead, it’s a card game for friends and family, and it doesn’t matter the age.

What Exactly Is the Fibber Board Game?

Fibber is a delightful card and board game featuring great accessories. It’s centered on popular animated characters that children relate to, yet the title revolves around bluffing — a trait common among adults.

The goal is to be the person with the smallest nose after the other player has taken all the noses.

Roll your die inside your shaker to begin your turn. After that, check to see what you rolled through the hole in the top. You’ve two choices at this time.

You may inform the other players of the number rolled, or you may tell them of any number from six downwards.

Then from the left, each player has the option of disputing the number rolled by the current player. If the number isn’t challenged, the player may take that many squares regardless of whether they actually rolled a different number.

If a player is believed to be lying, they must be confronted. There are two potential outcomes in this instance:

Any player can challenge you at any time by calling call “FIBBER!” if they think you’re lying about the cards you just announced you’re playing.

Whichever of the two scenarios happens, the Silver Nose must be moved on the Game Mat. Then, the person to your left continues the game by playing the next card in sequence.

You can play a Wild Card to replace other cards. This step allows you to confuse the other participant!

The Fibber game board features numerous particular areas that become active when players land on them:

If a player falls on the double space, they get to advance twice the number on their dice on their next turn. In this case, the player can still bluff. Due to the doubling effect, if a player rolls a three, they will report they rolled a six.

However, the player could fabricate their roll and claim to have rolled twelve (6 x 2). If any participant is caught in the act, they must return the space number indicated on the die, regardless of the doubling.

This area is similar to the double space; however, you get to triple the number you rolled/fibbed.

If — by exact count — one of the players lands at the beginning of a slide, immediately, they slide to the ending of that slide. The remaining areas on the slide are regarded as common spaces.

If you land on some particular square, you will forfeit your next turn if you’re still on it at the start of your next turn. So, one approach to prevent losing your turn is to make an inaccurate assumption about another player’s bluffing, as this will move you off the space before your next turn.

The game proceeds in this fashion, and the participants’ noses continue to expand until the players with longer noses lose.

If a participant discards all of the cards in their hand, they must remove all associated noses and start over. That competitor is given a do-over. The cards are rearranged, and the game starts afresh, but the remaining players’ noses are already attached.

After using all of the colored noses, the player who is detected lying attaches the silver nose. This ends the game. The player with the fewest amount of nose wins.

If there happens to be a tie, the participant having the least cards wins.

What Are The Fibber Board Game’s Wild Card Rules?

Wild cards may be substituted for any character card. Any time it’s your turn, and you use a wild card, you’re not fibbing. Therefore, if the opposing player calls you a fibber, that person forfeits the round and receives the piled-up cards in the center.

How Can You Break a Tie in Fibber?

A tie only occurs if two or more participants have an equal number of attached noses and silver noses. So, if this happens, then the player with the smallest number of cards wins. If more than one player has the same amount of noses and cards, all players must return all noses and play one last round. The player who adds a new nose first loses.

How Can You Tell If a Player Is Fibbing?

Since fibbers aren’t required to reveal their cards when apprehended, it’s impossible to calculate or forecast your opponent’s cards. However, it’s always beneficial to know how many single-character cards you’ve to balance the actual likelihood of a lie.

You can also use their body language, card call, and bluffing tendency to determine whether a player is fibbing.

Fibber is an excellent board game choice for everyone and requires no special skill to play. The challenging aspect adds more to the fun of it. Why not get one and try it out?