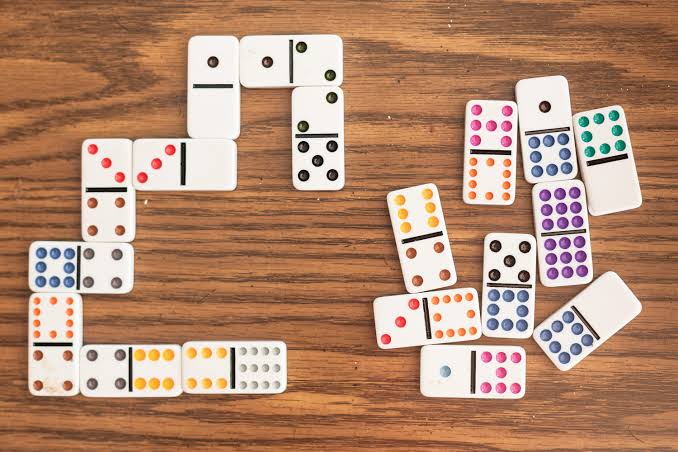 Looking for the best domino games for two out there? In this post, we review six options to try out with your buddy or partner.

Dominoes is a set of tile-based games that are generally referred to as dominoes. Each piece is a rectangle tile divided into two square and ends by a line.

It’s among the world’s most popular games. The title is straightforward to play but addictive once you get into it, as well as noisy, lively, and playful.

You can be confident that the winner will celebrate and brag; mocking opponents is encouraged, and dominoes are pounded violently against the table — sometimes so hard that they fly off.

The Domino game has many variants, which contribute to its enjoyment. If you’re gung-ho about playing dominoes, we’ve handpicked the six best domino games for two. Several of them, however, can be played with more than two players. 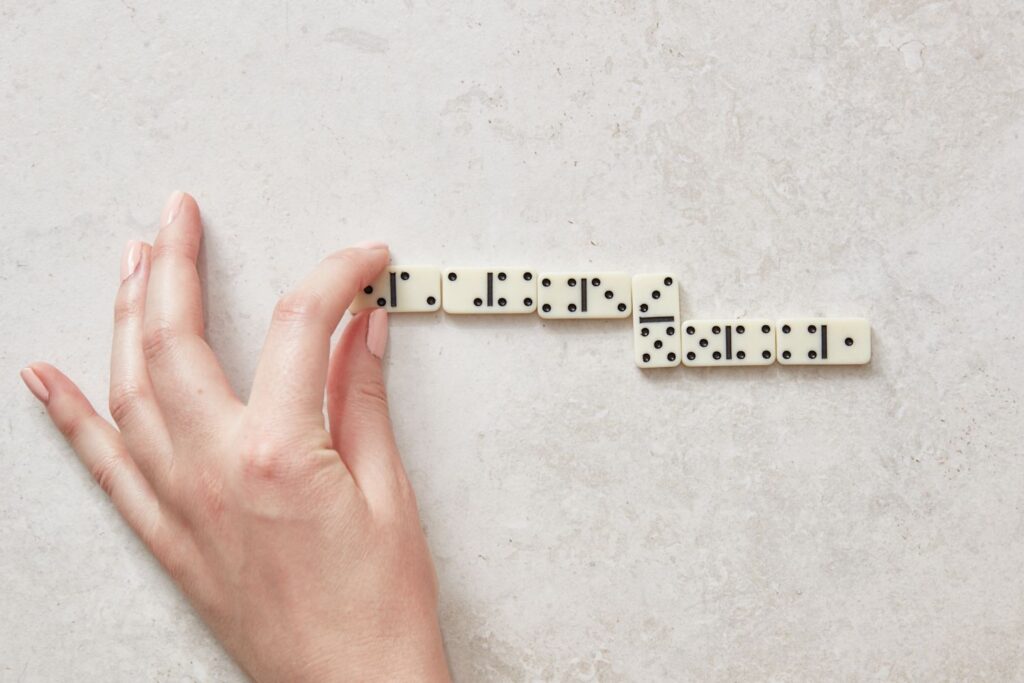 All Fives is a two-person game or more played using a double six set of dominoes. Each player gets five dominoes shuffled face down

The participant having the highest doublet goes first, then clockwise. A cribbage board helps keep score during and after each game.

The first person places any tile, and the game proceeds as in the Block Game, with each player placing a tile such that the numbers match.

Players also try to place tiles so that the total numbers at the chain’s end are five or a multiple of 5, contributing to their score.

Doublets are placed across the chain like in Block, and both ends count as all spots on the doublet.

If a player fails to declare a tile whose ends sum up to a multiple of five, any other player can cry “Muggins!” and claim the score.

When a participant cannot play, they take a sleeping tile from the table’s center. A competitor who cannot play passes for that turn when there are just two sleeping tiles left.

The game is over when a participant runs out of tiles or when no one can play a tile. The person who has no tiles left wins, or if no one has gone out, the player with the smallest total wins.

The Draw Game is a version of the Block Game that’s more popular globally. Initially, players take fewer dominoes, but those who cannot place one must pick up a sleeping domino.

A player cannot go when the sleeping dominoes run out. The play continues until a player has used all their tiles or the game is blocked.

The participant with the least amount of pips wins. Their points are subtracted from their opponent’s total to determine the winner. 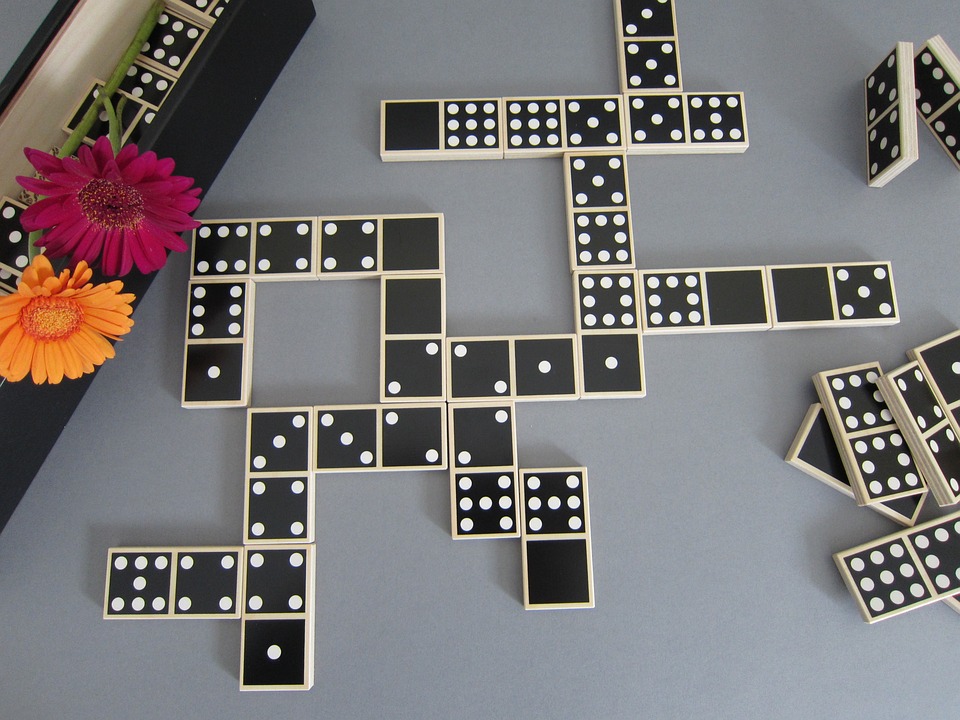 This is another classic two-player game.

To start the game, the dominoes are “shuffled” face down. One domino is drawn each. In case of no double, the player with the highest domino plays first. Reshuffle and draw the first hand.

Then, each player draws seven dominoes. The leftover dominoes, if any, are placed facedown on the table. It can be removed later if a participant cannot play from his hand.

The game starts with the First Player. The first player starts the game, and they can use any tile from their hand.

Following the first tile, players take turns playing tiles from their hands. To play a tile, you have to connect an end of your domino to an equivalent end of another domino.

You can draw from the graveyard or play a drawn tile if you don’t have a playable domino.

You’re allowed to play double tiles horizontally onto their corresponding tiles and both sides’ scores.

To gain a point, a participant must place a domino on the arrangement so that all open ends total 5. It gets 5 points for every multiple of 5. So, if you played a tile with a total of 25, your score is 25 points.

A participant can play domino by using all of their tiles. The game concludes, and the player scores based on what their opponents have left.

One participant starts a train, and other players can add to it. You can play double across but aren’t spinners.

Keep on playing until someone dominoes or the game blocks.

A player gets 2 points when his tile balances the train—called a “double-header” as two ends are exposed from the same suit.

A participant gets 3 points for making one end of the train equal to the other. He might have used a single or double tile—called a “triple-header” as three ends are exposed from the same suit.

This two-player trick-taking game is like Sixty-Six and Bezique. The player draws seven tiles from a double-six set each.

In this game, a blank is worth seven and not zero.

The participant that wins a trick is determined as follows. A trick’s winner is decided as follows. Save for 0–0; trumps beat all non-trumps except the double of trumps. If neither tile is a trump, the total pip counts are compared.

After each trick, both players draw a tile from the stock. The participants stop drawing when the supply runs out, or one of them announces that they will score at least 70 points.

From this point forward, the second player in each trick must do the following: Trumps must be responded by trumps, and non-trumps with tiles matching their higher or lower ends, if possible.

The game’s goal is to put all of your tiles onto one or more chains or trains that originate from a central hub or “station.”

This is how a typical double-twelve set works. Each round uses the next lower double until all doubles are used.

Play moves left. Per turn, each player lawfully places one domino or two if the initial domino is a double.

It’s over if they don’t set all their dominoes by playing corresponding dominoes end to end.

A train can be very long, and it ends when all possible terminus dominoes have been played. The consequence is long trains, especially with a long domino set.

The train can be “bent” 90° or 180° to stay on the playing field, as long as it does not interfere with other trains’ endpoints. It’s a tie if no one uses all theirs.

From conventional dominoes to the unique Mexican train dominoes, we’ve compiled a list of the six finest two-player domino games for players of diverse preferences, ages, and skills. Enjoy!

Games like Risk – Very Addictive I Must Warn You!