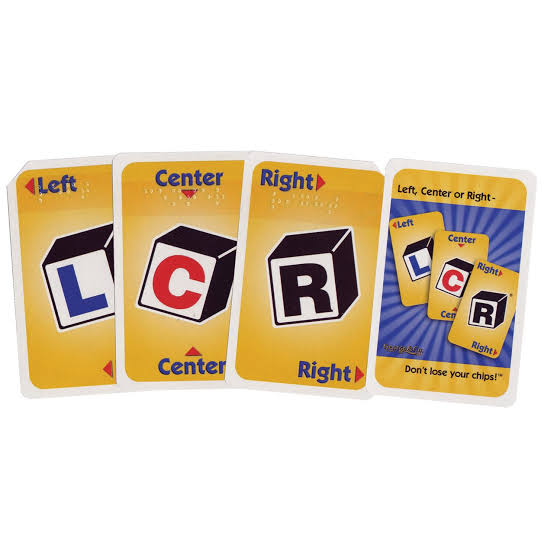 Left Right Center rules aren’t difficult to master, and once you learn the ropes, you can defeat your opponents consistently.

If you’re looking for a simple, enjoyable game that almost anybody can participate in without requiring any specific skills to play, then this title is ideal for you. Just get a few of your friends, and you are on your way to entertaining yourselves. All you need is a few couple standard six-sided dice and poker chips.

Also called Left, Center, Right (LCR), the title is a fast-paced chance game, where each player tries to be the last player having chips left at the game’s conclusion.

We will be discussing easy-to-follow steps for playing Left Right Center and the rules of the game.

What Exactly Is the Left Right Center Game?

LCR is an entertaining dice game and is also known as a drinking game. It was released by George & Company LLC officially in 1992. However, numerous varieties of the game have been played for a long time prior to that.

What distinguishes LCR from other comparable dice games is that it is entirely random. You can’t control anything in the game. The dice control everything. If you’re looking for basic, easy-to-play title, LCR may be the one for you.

The Objective of the Game

The players start the game with chips and then alternately roll the dice to choose where the chips should be passed. LCR’s objective is to be the last player standing with any remaining chips.

The great thing about LCR is that you don’t need any special equipment to play the game. What you need are

Alternatively, you can use poker chips or coins or the chips that come with the retail version of left right center.

While playing the left right center using special LCR dice is advisable, you can still use normal dice. This is mainly for those who are trying the game for the first time. If you choose to give this a try, you must adhere to the same rules. On the other hand, the dice numbers depict the dots, L, C, and R symbols.

Before the game commences, each player gets a minimum of three chips. However, you can increase the number of chips if you want to play a longer game. The game begins with at least three players, but more players can still join.

The game fully begins as soon as each player has their chips. Then they take turn rolling the dice.

Each time you roll a C, you must add a chip to the central pile. Dots indicate that you will not be passing a chip anyplace.

Thus, it would help if you aimed to roll as many dots each turn. The game is all up to chance, meaning there is a possibility you can lose all three chips at once.

How to Win LCR

When a player has fewer than three chips remaining, the rules somewhat change. According to the Left Right Center rules, the number of chips a player has determines how many dice they can role.

For instance, each player has at least 3 chips when the game begins, so they get to roll all three dice. That is, if you have 4 chips, you can only roll four dice.

If you run out of chips, you remain in the game, but you won’t be able to roll any dice. You have to wait until any of the players on either side of you pass you any chip, and you can roll again.

However, if a player does not get chips for two consecutive turns, they are eliminated from the game. The last player with chips left remaining wins the game.

The LCR Wild variant is packaged as a boxed game, although like the original, you can also use the standard six-sided dice in playing it. There’s a marked wild symbol on each side of the die in the retail version, but you can substitute one side as the wild side if you’re playing with normal dice.

Both games LCR Wild and LCR, have the same rules with this exception:

If you receive any Wilds (or 1s) during your turn, any of the following actions is taken:

If you’re playing the LCR Wild variant, you can incorporate this additional rule, which requires players to make a choice on their turn.

When it’s your turn, you can either roll the dice or pay three of your chips to the central pot before rolling the dice to change the dice’s effect from giving to take.

Bear in mind, though, that this also modifies the Wild effect. If you drop three chips in the center pot to change the dice, you must give any player you choose chips if you roll one or two 1s.

Furthermore, all your chips go to the central pile if, on your turn, all you rolled is all wilds (or 1s)!

As is the case with many dice games, Left Right Center is designed for quick play! If you’re searching for a simple game with an easy setup, LCR may be for you. Additionally, it’s an excellent drinking game to try out with your friends.