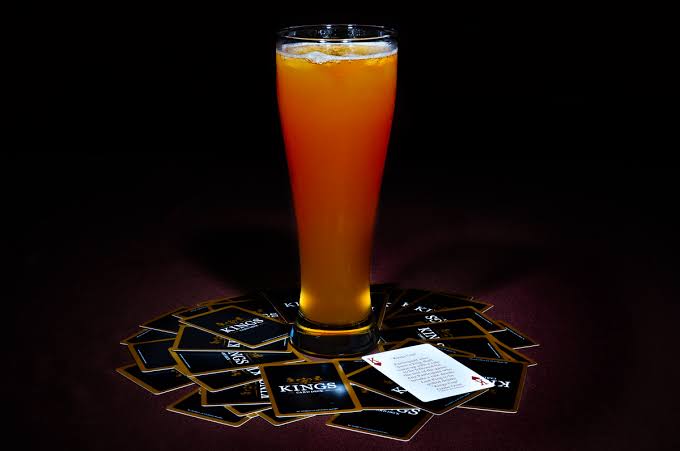 While learning King’s Cup rules, you’ll come across different variations. But the basic rules of the game are more or less the same.

Over the years, it has become increasingly popular mainly because it offers tight-knit friends tons of fun and serves as an ideal icebreaker for a group of people that aren’t all that acquainted with one another. It’s one of the best drinking games out there.

While scouring the Internet for King’s Cup rules and gameplay instructions, you’ll come across lots of versions of the game, each with different rules. For this reason, it’s crucial to first agree on the specific set of rules to be used with the other players in the group.

People love playing this title because it makes them get drunk nicely, allowing the participants to learn some things about one another’s wild sides. In today’s post, which a guide on King’s Cup rules, we explore all you need to know about the thrilling drinking game, focusing on the classic version to aid clarity.

What You Need to Play King’s Cup

Here are the things to have in place before you can get started:

You’re required to designate a cup as the King’s Cup, and this doesn’t necessarily have to be any special cup. Any cup or mug can serve that purpose.

However, to make the game even more enthralling, you could buy a golden chalice on Amazon. Cool options you can try out include The Golden Chalice of King Arthur and The King’s Royal Chalice Cup.

A Deck of Cards

You can play with any deck of 52 cards, but we recommend purchasing a deck designed specifically for King’s Cup. This is because each of those cards contain the rules of the game, thereby making things much easier.

Here are good options to check out on Amazon: Loaded Kings and King’s Cup Cards.

King’s Cup can take a minimum of 2–4 participants. If more people are around and willing to join, it’ll be more fun. But it’s important to ensure all participants meet the legal drinking age requirements.

This tip will make the game last longer.

Setting Up the Game

Doing the setup for King Cup is a walk in the park. Start by evenly spreading a deck of cards face down around the cup. Ensure all cards touch each other on either side to create a chain of cards.

Then, any number of players are allowed to gather round the cup, all set to start playing.

Regardless of the specific name you call this game, its basic rules are essentially the same. To get started, participants in the game are required to pick cards in turns, moving around the circle in a clockwise direction.

Each of the cards corresponds to a particular action. (We’ll explain this in detail shortly.)

Any player that breaks the card have to chug whatever drink that’s in the king’s cup in the center. Players usually find it quite unpleasant to drink the concoction of alcohol in the king’s cup.

Therefore, one of the major objectives of King’s Cup is that players must avoid breaking the chain, though even if you break one, the game still continues.

The game only comes to an end when all the cards are exhausted.

The King’s Cup Rules of the Cards

One of the universal rules you’ll encounter in this game, if the card you pick is an Ace, it’s equal to “waterfall”. This starts when all players chug their beer, spirit, wine, mixer, or any other drinks they’ve.

As the player that picks the card fully controls the round, they can stop drinking whenever they decide. Once they do that, the next player who’s clockwise to them then chooses when to stop drinking, and the round continues in that order.

You’ve to always wait until the next player by your left has stopped before you’re allowed to the same thing. As you might have realized, the last participant to stop drinking will get quite plastered!

This rule is a fairly simple one and is the classic “you”. Two means you can select one player to take two drinks or pick two participants, and each will take one drink.

This is yet another easy rule. It means you’ve to chug two fingers of your own drink.

The four card has to do with the ladies, whereby they’re called whores and must drink. We don’t particularly like this King’s Cup rule, so we present a variation to it below:

This rule means the player who picks up a 5 has to break a dance move. Then, the next participant will copy the dance move, adding a spin to it.

The game proceeds in this manner until a person messes up the dance and must drink. Watching drunken, uncoordinated dance moves of the players can be thrilling.

As Six is “dicks”, all players have to drink. Here’s an alternative to this rule:

If you pick up a 6, that’s thumbs down, meaning you’ll put your thumb on the table and the last player to do so drinks.

When a player that picks the 7 card is ready, they’ll reach for the sky using their two arms, and the remaining participants must do the same. The last player to reach has to drink.

This rule is useful for catching out players paying little or no attention, particularly if the picker doesn’t make use of the card immediately.

If you’re feeling less virtuous, you can also point down to the floor, and the last player to do so will drink.

This rule means a player can choose any participant to team up with them so that when one of the two partners drinks, both of them have to. With this rule, you’ve a good opportunity to show your crush you’re interested in them.

The 9 card can be a lot of fun depending on how creative the group is. Here, the player who picks the card has to say a word, with the rest of the participants going round the circle to say a word that rhymes with it.

For instance, “fall” is a very simple word, and other words rhyming with it are “tall”, “ball”, “call”, and so on. The game proceeds in this manner until a player can’t think of a new word or repeats a word and must drink.

This rule works similarly to the popular Truth or Dare game. You’ll challenge a player to truth or dare, and if they decline, they’ve to drink.

A 10 is also another creative card. The rule dictates that a player that picks the card must select a category, and each of the remaining participants must pick something that fits into the category.

For instance, the picker might choose “types of fruits”, and the remaining players must select fruits like an apple or carrot.

Any player that can’t think of anything or repeats a word must take two fingers of their drink.

Jack — Never Have I Ever

Arguably one of the most exciting cards to pick in King’s Cup, Jack allows you to learn a few of the dirty secrets of the players. After picking up Jack, which represents “never I have ever”, the group has to play one round.

If you’re not familiar with the rule, the game starts with all players putting up five fingers. The player that picked up the card announces something they’ve not done.

If you’ve done that thing, you put a finger down. Then, the next player says something they’ve not done, and the game proceeds in that manner.

The first player with five fingers down has to chug two fingers of their drink. The “never have I ever” statements can be as tame or racy as you want.

This rule offers you a good opportunity to know more about people, call your friends out on their ridiculous tales, and learn about people’s secrets.

Use this rule if you find “never have I ever” highlighted above too tasking. Simply make the guys drink on this one, especially if you prefer to do something different with rule six.

Here, you’ll make a rule for the King’s Cup game, and anyone that breaks it will drink. There’s an example of such a rule below.

With this rule, you can get creative and trick other players out without them suspecting anything. For instance, the question master can throw a question to a player, asking “is it your go yet?”

The question master continues in that role until another player picks up a queen, after which they’ll then take the crown.

Instead of the conventional rule four above, the “girls drink” rule offers you a better way to allow all the Queens (ladies) to drink.

If you pull a Red Queen, you can merge any three drinks from the table into a single shot, and then choose a player to take it.

King — Make a Rule (Pouring Some Alcohol into the Middle Cup)

We reach the King at last! Any player that picks the king can make a rule for the game.

Such a rule can be anything that has to do with the game, and any player that breaks it must drink. If you find it difficult making a rule, a popular one is “no first names”.

Thus, any player that makes use of another participant’s first name has to drink. As you might have guessed, it’s extremely easy to forget this particular rule when everyone is slightly tipsy.

Another aspect of the rule is that any player that picks up a king has to pour some of their drink into the king’s cup at the center.

The last participant to pick up a king is the unlucky player that has to chug whatever mixture of the alcohol left in the center cup!

The mixture will usually be blended from the three types of alcohol and can be quite unpleasant to drink, which makes the game all the more enthralling.

King’s Cup game rules are easy to master, and once you learn them well, you’ll be able to get a good grasp of the game. The title goes by various names, such as Circle of Death, Ring of Fire, Waterfall, or simply Kings.

However, its rules are essentially the same. It shares some similarities with Ride the Bus drinking game.

To play, all you need is a deck of cards, drinks, willing players, and the King’s Cup. With these in place, you’re set to enjoy some booze!