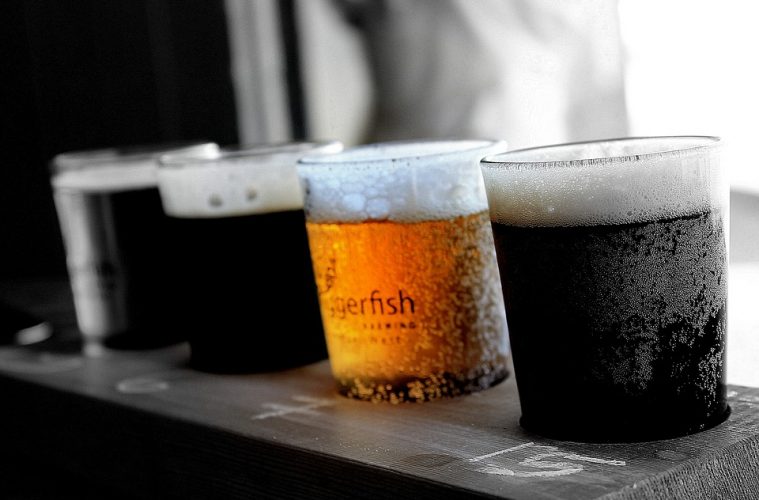 Irrespective of where you go, chances are that a Quarters game might be played at one of the local bars.

One of the most sought-after drinking games worldwide is Quarters, and for a good reason: It’s easy to grasp, fun, and can be played almost anywhere.

Quarters is a drinking entertainment in which players bounce a quarter or a coin of similar size off a table to try to get the quarter to land in a particular place, mostly in a shot glass (or cup) on the table.

The player who bounces the quarter is called the shooter.

In some variants, the glass is unoccupied, and each player has an individual glass which he’s to drink from, while in other forms, the cup at which the player is focusing on holds an alcoholic drink.

That simple adaptability has made it the ideal game that can be played in a bar, and a firm favorite among backpackers and barflies everywhere.

What You Need to Play Quarters

How to Play Quarters Drinking Game

The basic rules on how to play quarters.

First, clean your play area from spilled drinks, stray mobile phones, or any other obstacles that could get in the way.

You want to prevent anything that can interfere with your shots when the coin starts to fly.

Place a full cup of beer or a liquor shot in the middle of the table. These will serve as the penalty drink.

The goal cups can be all you have at hand, but remember that the smaller the goals get, the harder the shots will be.

Gather the players about the table and decide who goes first.

Since it’s a Quarters game, you flip the coin turn-by-turn to determine who will start.

The game starts with the 1st player being given a chance to bounce their quarter into his glass.

When you play with 1 glass, a group determines what your drink will be. If you play with one glass per person, the drinks are chosen by the owner of the glass.

Immediately a player lands his shot; the cup is passed clockwise to the next player within the circle.

If you effectively bounce a coin into your drink, you can decide who is going to have a drink.

The cups have to be at least 10 inches from the edge of the table when bouncing.

The quarters must be bounced on its surface and not the edges; also, all shots must bounce at least for them to be counted.

The objective of quarters is to keep away from having both cups simultaneously.

On each move a player receives, he has an opportunity to call ‘Chance.’ after his 1st unlucky bounce and can only call it once per round.

During your chance, if you let it bounce in your glass, you have to choose who has to take the drink now, and play continues.

If someone shouts Chance and misses their shot into the cup, this results in a penalty drink, and that player has to drink.

The player who hands over a second cup to another player should stack his cup in the other one or tap it with his cup. This is called screwing.

If you’re screwed, you have to make one last attempt to bounce the coin into the piled goal cups.

If you don’t make the bounce, you must take the drink in the penalty cup. But, if you do make the shot, you may hand one of the cups to any player who doesn’t have one in their hand.

A new round begins as soon as the penalty drink has been refilled.

The game keeps going until the players are tired of playing or can’t drink again.

There is no winning in Quarters, so don’t forget to have fun and also ensure that there aren’t any stray quarters in any drink you take.

Quarters is a game with a lot of regional variations.

Some of the best things about Quarters are the mixing and matching of various house rules, so we’ve put together a list for this game.

You can use as many or as few as you like.

The remaining players can challenge any near-shot that bounces either off of the cup or off the edge. The challenged player has the choice to either pass the challenge on and continue playing as usual or accept the challenge by shotting the coin again.

Making the shot equals all challenging players having to drink.

If you don’t succeed, you’ll have to take a sip or chug for a second for each challenging player.

Rule Three in a Row

The rule of 3 rows is one of the better known Quarters variants.

If a player takes three shots in a row without failing to land the coin, he may set up a rule.

Each time a player breaks a rule, he has to take a penalty drink. Every new law replaces the old rules.

The rules should be imaginative and funny, instead of humiliating or shaming.

Typical examples are the prohibition of showing, the use of the word drink, or the pronunciation of personal names.

The one-cup rule is a simpler version of the Quarters game and is well suited for small groups or a slower & less competitive audience.

This is another way to play quarters. In this variant, only one goal cup and one quarter are in play at any one time.

The players take turns and pass to the left after a successful shot.

The shooter’s turn end only when he/she fires a shot, after which another player of his/her choice must take a drink.

As the name implies, it’s a faster version of Quarters.

In this version, 6 or more people sit at a small table, lots of quarters, drinks for the individual player with 2 empty shot glasses in front of the opposing players.

As soon as the game starts, the two players that have glasses pick up a coin and try bouncing it off of the table into the glass placed in front of them as fast as possible.

If they didn’t make the shot, the players continue shooting until a shot is made by one of them.

This player pours out the quarter and gives the glass to the next player on his left, while the other shooter keeps shooting until he puts a quarter into his shot glass.

At some point, when repeated enough, a glass will catch with the other in rotation.

When this occurs, the player still shooting must knock over one glass and pile it the other.

This player has 2 chances of bouncing a quarter off the table and into the top glass. If he gets it on the 1st try, he may pass the stacked cups to any player, given that player 2 chances, and it goes on like that.

If the player does get it on the 2nd shot, piled cups are unstacked; one goes to the left player, and another to the opposite player. The game continues from the beginning.

If the player doesn’t land a quarter into the piled cups in two shots, the next player on his right turns a quarter while the loser chugs his drink until the coin stops spinning.

Each player can keep turning the coin with their finger to continue spinning.

Then the glasses are divided like at the beginning of the game, and the game starts again.

The game ends when the players feel they’re sufficiently drunk.

In this high-performance version of Quarters, a big penalty drink is in the middle of the playing area. This drink is called “Big Chug” or chandelier.

Place a glass at the base of the large cup for each player at the table.

As the game progresses, players alternately try to bounce the coin into the cups in the middle of the table.

If a quarter ends up in your cup, you must drink whether you’re the one who shot it or not.

If a player misses completely, he must drink. The individual player gets only one shot per round, with the game continuing on the left side.

If a player gets his quarter into the big chug cup, everyone must drain their whole cup immediately. The slowest player must then drink up the entire big chug cup.

Some versions of the game state that if the defending player takes his penalty shot after being screwed, the player who screwed him is now in the hot seat.

Between these 2 players, the game goes back and forth till one of them fails, after which they’ve to drink.

This is a rule that performs well for players who are more interested in showing off their skills than drinking a lot.

Next time you want to get the party going, but you don’t have the materials for harder drinking games, don’t forget Quarters. In this article, we’ve explained different ways on how to play quarters.

How to Play Quarters Drinking Game