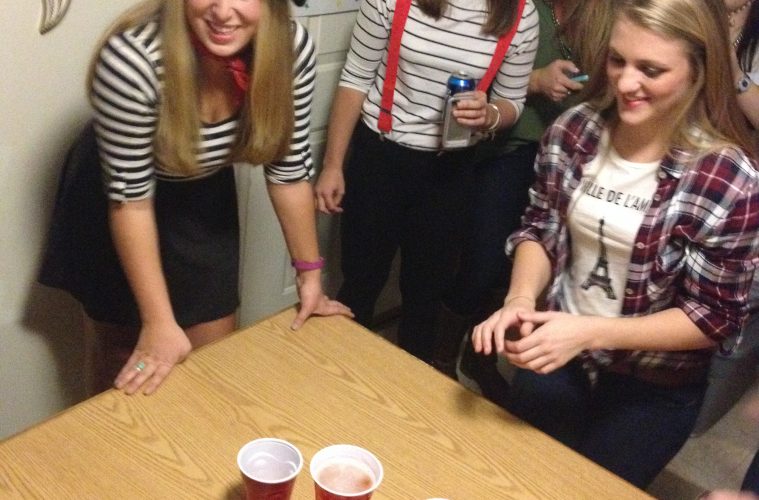 One of the summer’s favorite traditions is the Beer Olympics, which involves endless beer consumption combined with ruthless physical competition.

To make these games a memorable event, your friends’ love of sports and drinking is essential. Also, they must be willing to believe they can still drink beer just like they did in college.

Teams will have 4 – 6 participants, and every team has to contain an equal number of players.

You’ll need a minimum of 4 teams, but no maximum. Teams will usually contain an equal number of girls on them. This practice is necessary to avoid one team having an edge over the others.

Play the game with caution and choose the bigger number.

This tip is crucial because if you finish your beer cans when the competition is still in progress, you’ll be disqualified. Hence, your team will lose some points determined before the start of the game.

Also, it’s not as if any extra beer would be wasted.

While every team will compete in every event, not every team member will do so.

To score, take the number of teams you’ve and allocate that number of points for the first player in each event (for example, if there are 6 teams, 6 points goes to the first).

The last place is always awarded 1 point. And every team in between also earns the corresponding number of points, following that order.

Consider preventing confrontation by assigning a color to each team, and not a country.

How to Hold the Opening Ceremony

In the opening ceremony of the outdoor beer Olympics games, teams are introduced. Getting welcomed with a legendary song is fantastic and highly recommended.

Based on the decision of team captains, the order of events is announced, after which trash-talking kicks off.

The entire team participates in this event.

Also, volume chug is the best event to start your beer Olympic party with as it allows all team members to participate, and everyone gets really drunk within minutes.

Here are the rules:

This game involves 2 players per team, and it’s a staple of all BROlympic events. However, this is different from your mother’s 10-cup.

These are the event’s rules:

The number of participants in this beer Olympics relay race is 4 in a team.

Of the 4 members in a team, there must be at least one girl. And if your team is lucky, you’ll get the thin girl with a little divot in her stomach when on her back.

However, if your team gets a “bigger” girl, you’ll need to take that shot out of the belly button. A guy will take the shot off her; another will hold the funnel, and the third male participant will actually funnel the beer.

You’re not allowed to hold your own funnel as there’s no “I” in a team.

The girl will lay down on a table, with a single shot of an agreed-upon liquor (typically tequila) poured on to her.

After that, salt is spread in a line on her chest, with a sliced lime placed into her mouth.

Before “go”, each team can pour the beer into the funnel. When on “go”, the guy funneling must go down on one knee, drink up his beer, get up, and then sprint across (usually the lawn), and tag in the other guy. This other guy then races to the end of the yard, takes the shot, licks the salt, takes the lime, and then runs back to the finish line.

The finish line is on the opposite side of the lawn from the girl.

The team with the fastest time is the winner.

Here are the rules of this event:

A team loses a point in any of these instances:

Any player who fails to hold their alcohol for this particular event gets disqualified, and the team has to complete the BROlympics one man down.

This game requires 1 participant that has excellent hand-eye coordination, with one extra team member tasked with tossing the empty can.

Louisville Chugger, which is also commonly called “Dizzy Bat”, involves the use of a wiffle ball bat, where the bottom is cut off.

The bat gets filled with beer, and the time will start once the player lifts the bat for chugging. After that, he’ll put the bat on the ground, spins around ten times, and stands up into a batting stance.

Now, another teammate will gently toss the empty can of beer to him. The time will stop when the player strikes the can with the bat.

This is a later event in the outdoor beer Olympics games and is between the ten spins — with all the alcohol now consumed. It’s also the event that creates the funniest results.

These are the rules of Louisville Chugger:

Flip Cup involves the entire team. At this juncture, your motor skills are operating at the same level as those of a mentally handicapped penguin.

For this reason, this event is the best game to play, and everyone is familiar with how to play.

Also, no penalties are given in this game. The only difference is that in the Beer Olympics, 1 anchor is allowed in each team.

At this point, congrats are in order: You’ve got to the final event, Civil War. Here, 3 participants from each team compete.

In the game, you’ll follow the basic rules of civil war. 3 cups go to each player, and if your cups are sunk, you’re out the game.

Once the ball gets shot and bounces off a cup to the side of the table, it’s fair play for each team.

Only the participant closest could get that ball back as jumping across the table isn’t allowed. While they’re down, their team members safeguard their cups from bounce shots.

Here are the rules:

How to Handle a Tie

If a tie occurs, a case race is held. The teams with the tie will send 2 reps (unless four or more teams are tied, in which case there’s one each).

Then, a 30-rack is positioned in the middle of them. On “go”, they must consume as many beers as possible.

On completing the case, or when all sides have elected that they can’t drink anymore, whichever of the teams with the highest number of empty beer cans on their side wins.

How to Hold the Closing Ceremonies

On tallying up all the points, a winner is announced. The next is presenting the beer Olympics trophy.

As the first place is the only one that matters in the games, only gold medals are awarded. So, if you don’t come first, you’re last.

Armed with this knowledge on beer Olympics games rules, you can now make yourself proud by becoming a Beer Olympian!