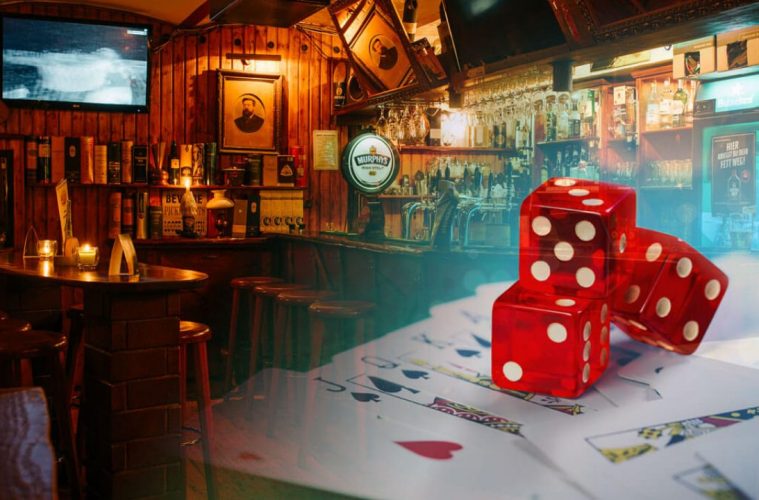 Whether you want to have fun with friends on a game night, a bar-goer, or bar owner, there’s something for everyone on today’s list.

This is one major reason they’re popular among players of all ages in various parts of the world.

In today’s article, we explore the 5 best pub dice games to play with your buddies. They’re both easy to learn and fun to play.

However, they’re hard to master — like any great game worth your time. 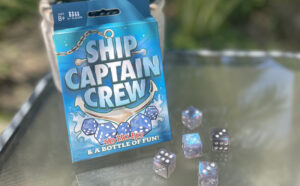 Bar dice is a drinking game usually played with 5 dice and a cup in a pub, bar, or tavern or pub. 2 or more people can play.

When played in a pub or tavern, the object of this game is to determine which of the participants will buy the next round of drinks.

“Ship, Captain, Crew,” is the most common iteration of Bar Dice and is played using a six-sided die.

Each player in a game of Ship, Captain, Crew will take turns to roll their dice to earn points or out-perform their opponents.

All participants will roll 5 dice at the same time, with three shakes to amass points.

When you roll the dice, you’re usually seeking for 3 numbers:

You’re required to have all these numbers before you can start gathering points, and you must look for each number in order.

Put in another way, you must secure your ship before you get a captain, and it goes on in that order.

As soon as you have got all 3, you can earn points from the last 2 dice in your roll, which implies that 12 is the highest score possible.

If, in the first roll, you secure your ship, captain, and crew, then you have an opportunity to do 2 more shakes for earning points.

If you fail to secure all 3 in your 3 rolls, then you just have to pass the dice to the next player. And you won’t collect any points for that round.

The player that gets the highest points becomes the winner.

Looking to play poker, but don’t have cards? Why not try your hands on Balut!

The game was built as an alternative to poker and is ideal when all you have is a bunch of dice without any deck.

There’s a standard set of rules for Balut. However, the majority of people like creating their own rules as they go along.

For this reason, Balut usually becomes a family favorite game, which is not played the same way, depending on where you play it and the people you choose to play it with.

In the basic rules of this game, players are tasked with creating a set of scoring combinations, and points are assigned to those combos.

Also, you can make use of the point strategy in the traditional rules for Balut.

As soon as you have your combinations sorted out, all the players in your group will take turns to roll a set of five dice and will note down the points they have earned.

The idea is to continue rolling until all possible scoring combos have occurred at least once.

On getting to that point, the player that has the highest score becomes the winner.

In another interesting rule in the game, when any player rolls 5 of a kind, they have to shout “Balut,” which looks like yelling at a game of Bingo.

In addition to this, you can make the dice game more interesting by asking your pals to note the number of times they feel a Balut will occur in the game.

If a player guesses correctly, then they can either earn additional points or a special prize.

This is a dice game that requires a lot of luck. To play, you need 9 dice. It’s usually played with a total of 12 participants, which you’re to divide into 3 teams of 4.

Though you can play it with fewer people than 12 (or even more than that), you have to split everyone in a group of 4 to play.

Like the majority of dice games, winning Bunco all boils down to luck.

In the competition, the object is to roll the number that matches the round you’re playing. For example, if you make it to the 3rd round, then you’re required to roll three 3’s.

If you make it to the 4th round, then you’ll aim at rolling four 4’s, and it goes on in that order.

You’ll get a “Bunco” (a single point) every time you successfully roll the right amount of the number to match the round.

When the game comes to an end, the player that has the highest points is the winner.

According to the World Bunco Association, Bunco had witnessed a resurgence in popularity in the US in the early twenty-first century.

In 2006, it was claimed during the previous year, more than fifty-nine (59) million women have played the game, and more than twenty-seven (27) million play it regularly.

Yahtzee is also one of the 5 best pub dice games. Its roots have been traced all the way back to some old pass-times, with “Yacht” being one of its variants.

In modern times, the classic Yahtzee game is probably among the most popular dice games in America, and even in other places around the world. Other games you should check out: Quarters Drinking Game , Shuffleboard Game

The object of this game is to roll 5 dice and try to earn points by making specific combinations.

You’re allowed to roll your dice up to 3 times in a single turn for creating the combinations you need. Also, it’d be best if you kept the dice within the box.

A single game of Yahtzee has 13 rounds. After each round, a player selects which category they’d like to make use of for that round.

Once you have used 1 of the 13 categories available, you’re not allowed to use it again, so make your choice wisely.

Every category in this game has its own scoring system. You’re allowed to save specific dice in one roll by choosing to re-roll other dice if you wish.

You have a “Yahtzee” when you realize 5 of the same number in a single roll, and it carries fifty points.

As expected, the player that wins this game is the person who earns the highest number of points at the end of the thirteen rounds.

You can practice your Yahtzee skills by playing on the Internet on websites such as Freethedice.com. Such platforms let you test your skills against other Yahtzee players.

Liar’s Dice is also a popular dice game people play with friends in bars and pubs. It became famous again after the Pirates of the Caribbean movie series hit cinemas, as everyone desires to be a pirate!

If you have seen the movies, you would know the pieces of equipment required to play the game include a set of five dice and a cup. The cup helps you conceal your rolls from other players.

Play involves everyone in your team rolling their dice at the beginning of the game. When you’re rolling, if any of your dice land on top of each other, you need to start again.

Bear in mind that you shake and move your dice in a cup to ensure they are hidden from the other players.

After all players have successfully rolled their dice, they have to ensure their dice stays hidden, while players bid on the value of the dice in the entire team.

This means that if you bet that there are four 5’s on the table, and you only have one 5 yourself, you’re anticipating that the other people around you have a minimum of three 5’s for adding to your wager.

After each prediction, your team has these 2 options: Continue playing, or one player challenges another and calls them a liar.

If someone is challenged, then all of the dice on the table are shown.

What makes Liar’s Dice particularly fun is due to the deception involved. However, you need to exercise caution and avoid playing with any sore losers!

Other great pub dice games to try are Shut the Box (also called, played with two dice in an open tray) and DAGZ (Dice Angle Games), one of the newest dice games for bars, played with a special game board.

The best 5 pub dice games are ideal to have fun with friends on a game night, for bar-goers, and bar owners. Just like card games, these dice games don’t need any huge investment to have a great time.

Best 7 Mystery Board Games to enjoy with Family & Friends